Back in July I took the two Oh Waily kids for a drive up the coast to Kapiti and the    Nga Manu Nature Reserve.  We went mid-morning in order to join the feed out tour, in which visitors get to meet some of the birds up close and help feed them.

On arrival we were met by some friendly locals.  Perhaps they look a little familiar.

Once we headed off on the tour with our lovely guide, we were able to enter enclosures and offer food to a variety of native bird species.  Robyn was very patient with my fidgety pair and explained about each of the birds as we met them.  By the time we had visited the first two enclosures I knew I wasn’t going to be able to take photographs, corral children, feed birds and listen to Robyn.  So the photography was ditched.  The only native that I got a shot of before realising this was a kaka.  It was fabulous getting to see them all up close for the first time.

Along with the kaka, there were kereru, morepork, kiwi, swans, ducks of all stripes including a group of scaup, and the world famous kea.  Who really are just as cheeky and smart as their reputation suggests.

We got to watch the whirlpool effect of the scaup’s webbed feet as they dove for food, and saw the kiwi snuggled up in their nesting box.  We learned that pukeko are the worst predators of other native birds and that the resident head kea has a rather understandable penchant for creamed rice and will try to sneak it at every opportunity.

After we had made our way around the feeding route we then headed off to explore the lovely bush walk.

And enjoyed the bright undergrowth that was fallen and aged ferns.  It was rather spectacularly bright and cheery.  And unexpected. 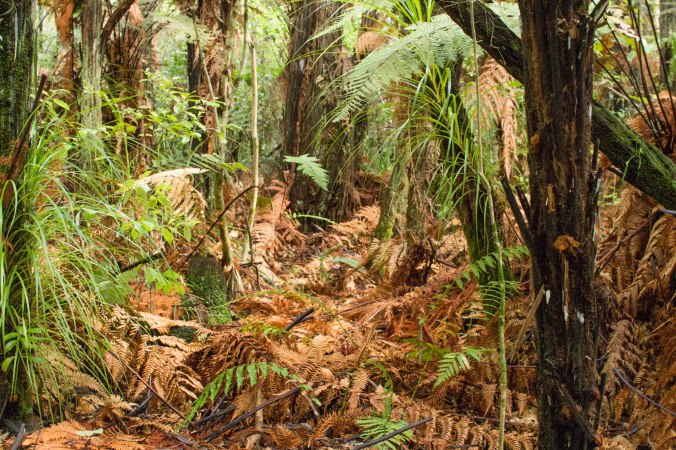 And then there was the view from the tower.

Very well worth the couple or so hours we spent there. The only thing I would do different next time is to take a second pair of hands to wrangle the kids on the feeding tour. They needed to be lifted to reach many of the birds so were ever so slightly too young to get full value out of it.

If you just wanted to see the birds and have a nice picnic and walk in an easy setting then this is a great option for a few hours.

This site uses Akismet to reduce spam. Learn how your comment data is processed.

What we talk about

Quote of the Month

“We are what we repeatedly do. Excellence, then, is not an act, but a habit.”