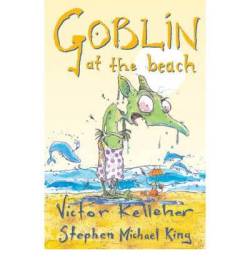 Who were the main characters & what were they like?

Miss OWW:  Gibblewort, is a Irish goblin. He was incredibly funny, even funnier than before.  He’s green and he’s got warts on his nose.  He hates baths.

Master OWW: Gibblewort is an Irish goblin. He is so funny because he rode a whale and a dolphin.

Can you tell us what happened in the story?

Miss OWW: Gibblewort rode a dolphin, he also rode a shark and the shark was trying to shake him off.

Master OWW: He fell out of a truck and he said “this isn’t the way to old Ireland”.  He said, “This is just a beach with lots of people running around in their underwear.”

What was your favourite part of the story and why?

Miss OWW:  My favourite part of the story was when he got stung by jellyfish because it was really stingy.

Master OWW:  My favourite piece was him getting a ride on a shark because he got bitten on his warty nose.

Rating for this book.

And to finish up here is Miss Oh Waily’s rendition of the hapless Gibblewort.  She drew him as a gift card for her brother, hence the folds in the paper. 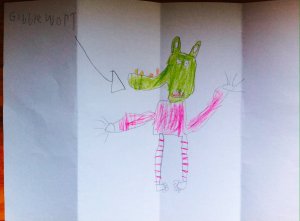 One thought on “Book Review: Goblin at the Beach – Victor Kelleher”

This site uses Akismet to reduce spam. Learn how your comment data is processed.

What we talk about

Quote of the Month

“We are what we repeatedly do. Excellence, then, is not an act, but a habit.”